*NOTE:  Live and learn. Since making this post I have become aware that this stretch of drainage channel apparently originated in the Hasmonean period, before Herod. It remained in use through the Herodian period (and probably later ones), however, so perhaps it is not incorrect to say “Herodian”. For the story on this route’s northern extension, under the city wall and ending at the corner of the Haram/Temple Mount, see my later post of 22 OCT 2011.

Yesterday I had some folks visiting the City of David, and we discovered an additional section of the cleared Herodian drainage channel (sounds better than ‘sewer’!) newly open to visitors. It had only opened three days before, on Sunday, we were told. Whereas until now visitors had to exit the channel halfway up Ir David Street, they can now continue on as far as the Givati parking lot excavation area, near the head of the street and not far outside Dung Gate. The following sign calls the entire ascent a ‘road’ — they were shooting for ‘route’, I believe — but most of it is in fact a drainage channel. 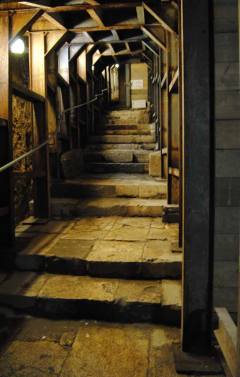 Looking north along the Herodian street, on the western side of the Upper Siloam Pool. (Photo source: http://dqhall59.com/ israelphotosV/siloam.htm)

The following interpretive installation gives the big picture. What is often not represented very well, though, especially in media accounts, is how these spaces actually relate to each other. It’s really quite counter-intuitive: You begin ascending through an excavation tunnel, with modern bracing overhead, walking atop a stepped street which in ancient times was open to the sky. Then, after a short distance, the route turns left, ascending a modern metal staircase (going up at least 3 meters in elevation, I would say), and then turns back to the right, continuing through the cleared, ashlar-built channel capped by thick, ancient stone slabs. What is never explained is that (I presume) those slabs are the pavers of yet another street running now overhead. Ascending northward toward the Temple area, the two streets would have merged at some point. The diagram below shows this exactly (what it doesn’t show is that, as we now know, yet another stepped street ascended on the east side of the pool, along the scarp). Actually, it is also possible that the lower and upper streets date from different periods; this would be quite clear if one pavement were found to actually overlie the other, but I have never heard this addressed. 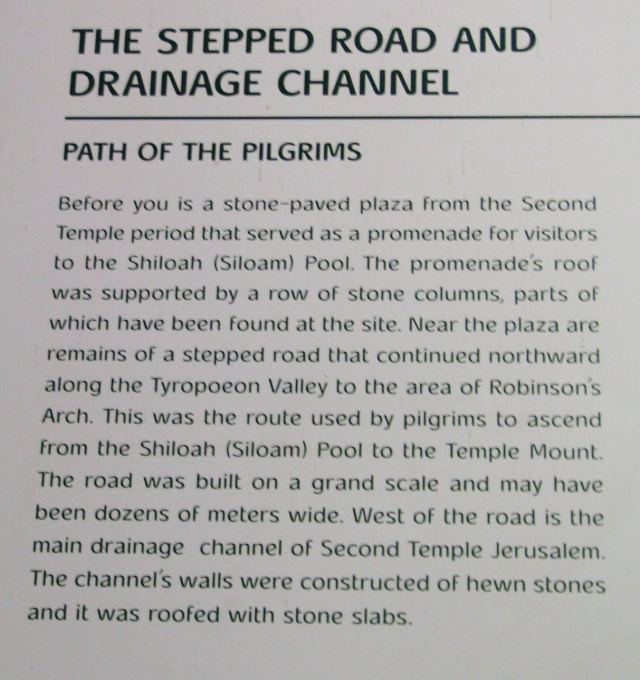 This graphic shows two stepped streets both ascending northward — at different levels — to the west of the Upper Siloam Pool. (Source: Historical Atlas of Jerusalem, by Dan Bahat)

This is the former exit from the drain channel, connecting to a deep excavation shaft halfway up Ir David Street, between the Siloam Pools and the Visitors’ Center; it is now designated as an emergency exit. The newly-opened section proceeds to the right.

The newly-opened segment. The sign warns, quite rightly, of the low ceiling. If you didn’t before, you may find yourself walking like Groucho Marx when you come out!

The present end of the newly-opened section: The sandbagged passage (left), to be opened in the near future, leads on under the Old City wall to the SW corner of the Haram/Temple Mount. On the right are the channel exit and stairway leading up to the Givati parking lot excavation.

At the present end-point for visitors, this stairway leads up into the huge Givati excavation area. (A worker is seen descending toward the channel, against the normal traffic flow.)

At the top of the stairway, visitors have a view of the excavated areas of the former Givati parking lot, which has been systematically explored over the last several years. This photo shows Late Roman structures in Givati’s northwest quadrant.

This brand-new boardwalk wraps around the northern end of the Givati excavation site, giving visitors a nice view of the exposed remains.

The Givati excavation, northeast quadrant, from the boardwalk (looking west). These are more Late Roman remains (at far right is a nice mosaic floor)

For those who wish to “dig deeper” (as it were), here are links to the three official reports published so far on the Givati site. I think they deal with the southwest, northwest and northeast quadrants respectively:

Finally, a glimpse of things to come:  A couple of weeks ago, touring the excavations at the southwest corner of the Herodian Temple Mount (Davidson Center), I caught a glimpse of the new exit being prepared there, coming up through the ancient pavement, as shown in these final three photos. I have asked people connected with both the City of David and the Davidson Center what the implications are of linking the two sites underground, in terms of ticketing, administration, etc. I am particularly interested in knowing (some would say obsessed with) whether the Davidson/ Southern Wall/ Ophel site — it’s gone by so many different names! — will fall under the purview of the Elad settler organization, who were long ago given control of the City of David “national park”. Well, the people I’ve asked either don’t know or they are not allowed to say. We shall see…

At the SW corner of the Temple Mount, looking north along the Herodian street. Note the tunnel/channel exit surrounded by a turnstiled railing. In the background a bar mitzvah is going on!  (For this and the following two images, I am indebted to Dominik, one of our summer volunteers at the Ecole Biblique.) 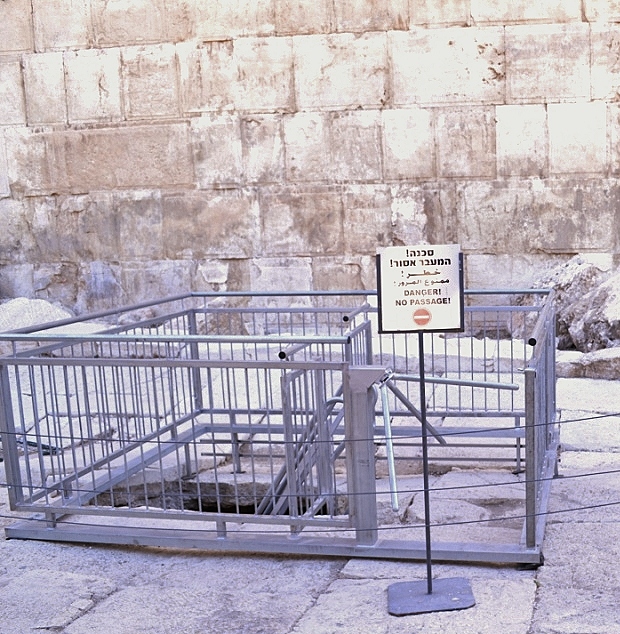 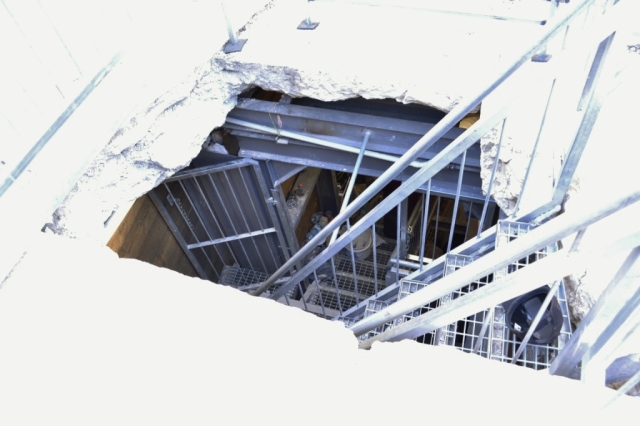 Finally, here’s a free resource that helps put these tunnels/channels — and all of Jerusalem’s underground spaces — in their larger context of Jerusalem archaeology through history:  Jerusalem Underground

Here are two other useful resources from the same organization (hint: NOT the “national park” people):

For the story on this route’s northern extension, under the city wall and ending at the corner of the Haram/Temple Mount, see my later post of 22 OCT 2011.