The Disappearing Dome of the Rock

The image as it appeared on-line (my markup)

No, it’s not an elaborate stunt produced for a David Copperfield TV special (is he still around, anyway?). This slight-of-hand was carried out by the rabbinate of the Israeli Army (IDF) who, in illustrating a booklet about Chanukkah observance, found the Dome of the Rock and the nearby al-Silsila minaret looming over the Western Wall a bit, well… inconvenient. Not to worry, though. Just start with a rather atmospheric image, have a go with the airbrush tool in your favorite photo editor to add a bit of fake fog, and… PRESTO! — No Dome.

The story was carried in Haaretz on 05 JAN 2012, found on-line HERE (which includes an unmanipulated “before” picture, from approximately the same angle, for comparison). The picture as reproduced in the Haaretz print edition (it ran with the captions only) turned out rather muddy for some reason, but the bottom parts of the Dome of the Rock and of the minaret are quite clear. I include a scan of it as well:

This is not a unique phenomenon by any means. What’s rather outrageous is that this example — this altered reality —  was perpetrated and issued to military personnel by an official government office. Really, though, there is a whole genre of this kind of now-you-see-it-now-you-don’t art involving the Muslim shrines on the Haram al-Sharif/ Temple Mount. The hot-spot for this, in my experience, is the Cardo “mall”, the string of upscale shops, studios and galleries in the heart of the Old City’s Jewish Quarter. Granted, some of the art edges toward the mystical and idealized, BUT almost always the Western Wall and the expansive post-1967 plaza fronting it are depicted very realistically — these are not illustrations of ancient Jerusalem. (A thought question: Is this the Jewish-Israeli analog to Muslim-Palestinian “Temple Denial”? And, if so, do the two phenomena somehow reinforce each other?) Following are my photos of prints and paintings seen on display on the Cardo on a recent visit: 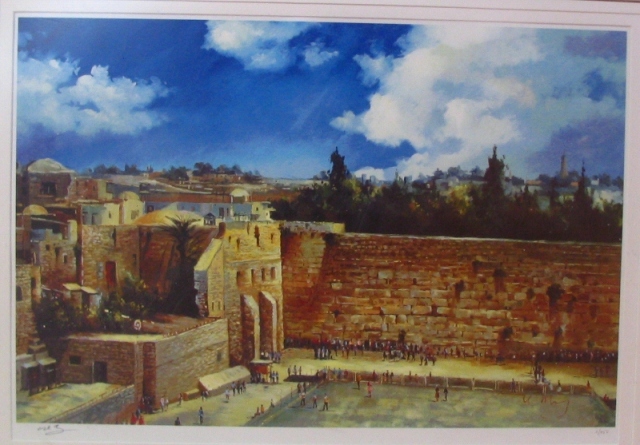 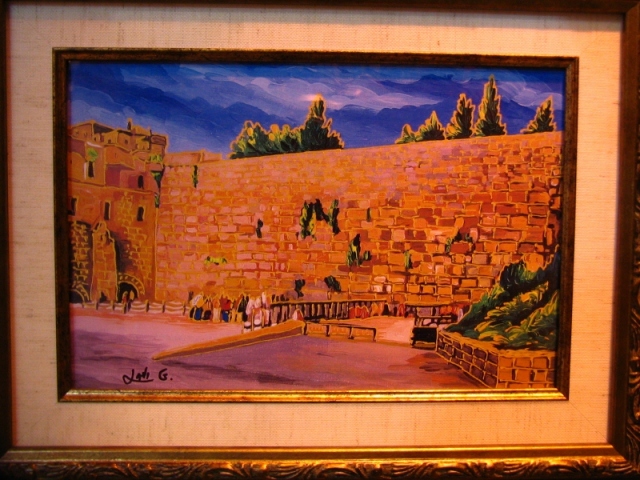 Once the inconvenient Muslim shrines disappear, if you like, you can have the Third Temple (I suppose) descending in a radiant cloud, or hovering mysteriously over the modern Haram/ Temple Mount… 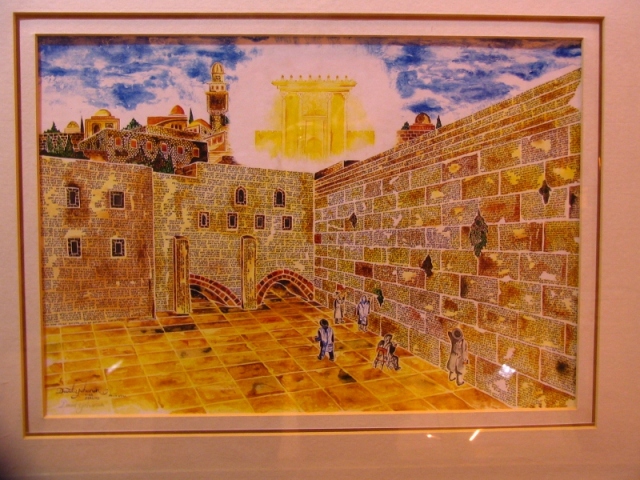 …OR, you can have it firmly planted on the transformed esplanade. For this you pay extra, I believe… 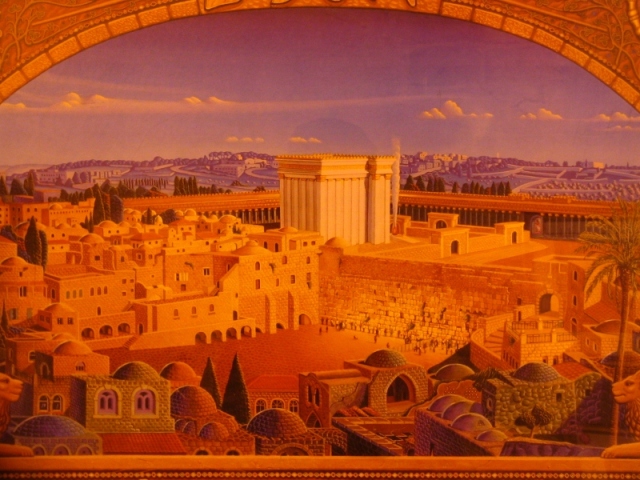 Some may find this sort of thing heart-warming and inspirational, and others (like me) a bit chilling. At the same time, I have to remember that religious Jews have prayed every morning, for hundreds of years: “May it be Your will, L-rd our G-d, and G-d of our fathers, that the Holy Temple be speedily rebuilt in our days.” Even though it’s not in the Bible, that must be pretty compelling, especially when your people have established a sovereign state in their ancient homeland  and exercise more or less total control over Jerusalem. What are we to make of it all? It’s all in one’s perspective, I guess.

From a purely Christian perspective, I find the obsession of some believers with a “Third Temple” an unnecessary, unhelpful and un-scriptural diversion: Consider that — even though I don’t pretend to understand all that the passage means and implies — the writer of Revelation, in Chapter 21, is envisioning a “NEW heaven” and a “NEW earth” and a “NEW Jerusalem”, which, yes, is “coming down out of heaven from God”. But wait… “I saw no temple in the city…”! Why? “…for its temple is the Lord God the Almighty and the Lamb.” End of sermon.

OK, just when I thought I had exhausted this topic, on 12 JAN 2012 Haaretz ran a retrospective of a 1997 story about a “funny” gift presented by P.M. Netanyahu during his first term as prime minister. It happened that the PM made a special trip in order to present in person, to the prelate of the Greek Catholic church in the country, a piece of art supposedly depicting the present-day city of Jerusalem. A nice enough gesture, but it seems there were… um, some things missing! The story says, in part:

As the new year of 1997 dawned, Prime Minister Benjamin Netanyahu traveled to Haifa to visit the head of the Greek Catholic Church in Israel, Archbishop Maximos Salloum. Netanyahu gave the archbishop a silver engraving of the Old City of Jerusalem and wished him a happy new year.

Soon, a rumor spread that the gift lacked several key elements. Haaretz reporter Joseph Algazi called the archbishop, who acknowledged that the Muslim holy places, the Al Aqsa mosque and the Dome of the Rock, did not appear on the engraving. Instead there was “an approximation of the Second Temple,” a Jewish holy site.

I have searched on-line but have been unable to find a picture of this object, so on this I must withhold judgment (just a tiny bit).

Once again, I thought I had squeezed this for all it was worth. But… oh, no:  Today I ran into the web-site of the Global March to Jerusalem. Whatever the merits of this upcoming event on 30 March 2012 — and I basically support their efforts to raise worldwide awareness of realities here — it seems they have foisted a visual trick on visitors to their main web-page. It falls in this same category, I’m afraid, but from “the other side”. Have a look and see what you see — or don’t see:  http://www.globalmarchtojerusalem.org/main/  [Sorry, page no longer exists –tp/2014]

That’s right, even though it’s “only” a painting, they have managed to “airbrush out” the thousands of Jewish graves covering the southern slopes of the Mount of Olives! Now, if I were completely given over to cynicism, I could just shrug this off and say “turnabout’s fair play”. BUT, if Jerusalem is to ever have a just resolution of its issues and the competing claims of its various peoples, it’s NOT going to come through airbrushing the “other” out of history or off the map. It’s not helpful and it’s not legitimate — whoever does it.

America’s ambassador to Israel, David Friedman — nominated by President Donald Trump and approved by the Republican-dominated Senate in 2017 — has now gotten in on the “Disappearing Dome” act, as recipient of a doctored aerial photo complete with the standard replacement Third Temple.

According to a disclaimer issued later by the Embassy, and an apology from the organization involved, Friedman may not have been aware at the time of the nature of the image thrust before him at a photo-op. Still, consider the company he keeps…

See the story in Haaretz HERE. 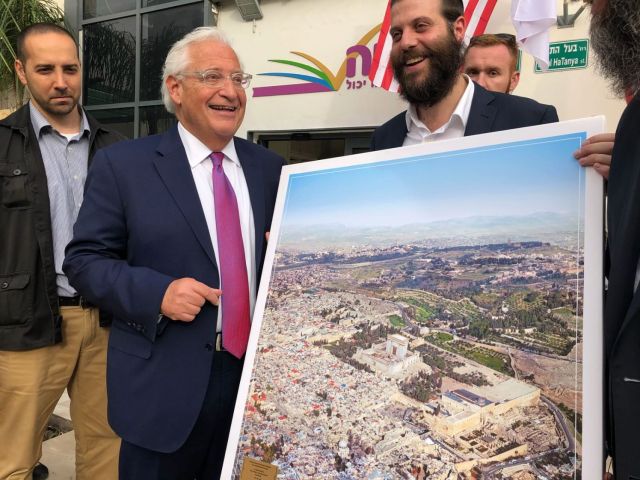 On reviewing the above photo, I’ve just realized that the graphic artist (?) who produced the doctored image placed the imagined Temple atop the so-called Temple Mount… backwards, facing WEST instead of east!  I guess when you want to make a political statement, historical and biblical accuracy are just not that relevant.  Check it out…