The Holy Sepulchre through time: A new video of virtual history

The folks at ATS/ proTerraSancta, the official NGO support arm of the Franciscan Custody of the Holy Land, have just come out with a new historical overview of the Church of the Holy Sepulchre in VIDEO form and employing computer graphics. 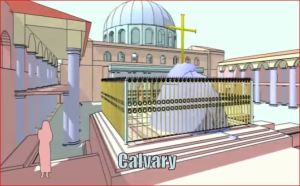 The Byzantine inner atrium and the rock of Golgotha, viewed from the SE.

This present effort starts with today’s church and in 14 minutes takes the viewer back through time — all the way back: the 19th century modifications following a disastrous fire; the church of the Crusaders, which is what we mostly see today; the vast 4th century sacred complex of Constantine; the Late Roman pagan temple built by the Emperor Hadrian; and, finally, the original quarry-garden-cemetery of 33 AD! (To give you a sneak preview, I have included a couple of screen-snips here.) Especially if you’ve ever scratched your head over how Golgotha and the Tomb of Jesus’ resurrection might have wound up within the confines of this unique place, the Church of the Holy Sepulchre — or, if you’ve never really had occasion to think about it at all — then you should find the video instructive and perhaps challenging.

LINK to VIDEO: “Holy Sepulchre, a 3D-journey back in time”

In the Temple complex of Hadrian, pagan statues covered the places of the Tomb (left) and Golgotha (right), according to the Church Fathers

A few caveats, based on my own reading and research: First, being Catholics, they make much of the Finding of the True Cross (which I regard as pious legend), therefore in every period they have to have a crypt beneath the church or a “cistern” where the crosses were deposited and later found. However, the crypt we know today I think is widely regarded not to have existed in the Byzantine complex, plus I know of no evidence that it was ever a cistern — it is simply the deepest part of the ancient quarry that underlies much of the church.

Other (mostly) minor points: The main columns of the Byzantine rotunda do not look right to me –not tall enough; related to this: in the same scene, the Rotunda’s multiple upper galleries are quite conjectural. As for the Byzantine basilica — and these departures I judge a bit more glaring — it seems some clear archaeological evidence has been ignored: They show an external apse, whereas the modern soundings beneath the Katholicon, the very center of the present church, revealed an inscribed apse. Related to this, in the Byzantine triportico, the colonnaded inner atrium, the eastern portico is depicted as truncated — cut off — to allow for the basilica’s external apse. However, once again, the excavations there brought to light the stylobate (column-bearing foundation wall) of the portico, with an original column-base in situ, running right along the back (western) wall of the basilica, opposite the apse area, without apparent interruption.

In the Roman period reconstruction, the Hadrianic temple likewise represents a lot of guesswork — there really were not enough traces of it found to suggest its size, shape or placement with any degree of certainty. Dr. Shimon Gibson, for one, considers many of the Late Roman remains as consolidation walls, intended to contain fill material and provide a solid platform for whatever was built above. Nevertheless, the artists had to depict the temple and I can’t really fault them. About the 1st century setting of Golgotha and the Tomb: I can’t help thinking it looked more like what it was — a disused and partially filled-in quarry, with more vertical expression and exposed rock surfaces. But, again, it’s an interpretation.

Two quirky things: at 3:00 into the video the omphalos, the “navel” of the world, bounces in, in a rather whimsical fashion, to take its place in the Crusader church plan! And, at about 12:20, on Holy Saturday 2,000 years ago, the sun traverses the sky from west to east! — watch the shadows. Apart from these (picky?) observations, the video overall really is a valuable tool and a wonderful aid in visualizing how the ancient site, and then the structures built upon it, evolved over time.

If you resonate to this sort of thing, here are two other resources you may find of interest: One is the recently published book The New Pilgrim’s Guide to the Holy Sepulchre which is published by the same folks and makes use of some of the same computer graphics; copies may be available in Jerusalem from the Christian Information Center inside Jaffa Gate. Secondly, some may find my overview of the Holy Sepulchre of some value; you can launch the PDF file via “My Articles” on this web-log.