UPDATED The Aqueducts of Bethlehem: An interactive map

The purpose of this brief post is to point folks — any who may resonate to such minutiae — to a custom map which I have assembled. It focuses on remnants of the ancient Upper and Lower Aqueducts of Jerusalem, specifically parts of those conduits which are still to be seen in the town of Bethlehem. That so few sections of this system are still visible or known, even to locals, is quite alarming, especially when one realizes that the Lower Aqueduct was apparently still carrying water, all the way from Solomon’s Pools to Jerusalem, right up until the turn of the 20th century!

For more background, see my overview of the entire ancient system HERE. If you can’t get enough of aqueducts, try this previous post of mine, or this one.

The map which I’ve put together uses the Google Maps platform. All of the markup, as well as the embedded photos and descriptions, are mine. In addition to the seven discreet places (yellow pins — CLICK!), I have also highlighted some nearby landmarks which may help some users, those who know Bethlehem a bit, to get their bearings. 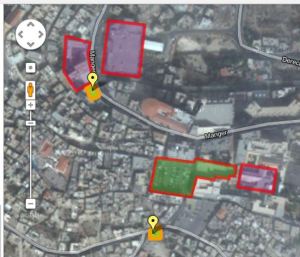 In addition to the visible remains marked on the map, there is a certain Bethlehem street which one expert has determined is likely built atop a portion of the Lower Aqueduct. As he notes HERE, the street has an almost level gradient and is named (especially on some older maps) “Qanah”, or some variation, clearly echoing the word “canal”. Moreover, the street leads eastward exactly to the “Al-Ain” site, where the aqueduct enters a tunnel (for both, see the map).

(NOTE: The web-site referenced just above, The Great Mirror, belongs to Dr. Bret Wallach, a geography professor at the University of Oklahoma. It contains over 10,000 photographs from all over the world, including several “chapters” each on Israel, Jerusalem and the West Bank. These photos were taken mostly in the late 1990s when, despite the Occupation and the early demise of Oslo, the country could still boast of some semblance of normalcy. Additionally, Wallach’s 2001 essay “Window on the West Bank” offers one of the more thoughtful and balanced perspectives on the Israel-Palestine scene that I’ve encountered — well worth a read.)

Since first making this post just last week, I have discovered yet another quite impressive segment of the Upper Aqueduct. It was there all the time, visible through the front glass doors of the Bethlehem Historical Museum, on Hebron Road opposite the Intercontinental Hotel (Jacir Palace)! I have now added this section to the map, with some photos borrowed from the museum’s web-site.

2 Responses to UPDATED The Aqueducts of Bethlehem: An interactive map