Through the American Colony Lens: GRAF ZEPPELIN OVER JERUSALEM 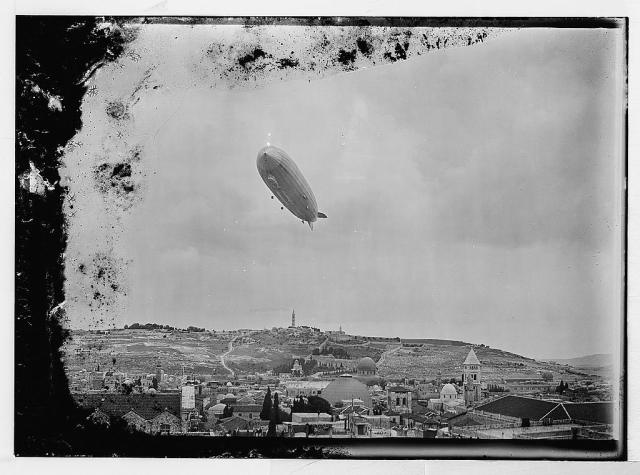 The view here is looking eastward across the Old City, the vantage point a rooftop, or perhaps the city wall, in the Christian Quarter. The large gray dome (bottom) is the Church of the Holy Sepulchre; beyond that the distinctive Dome of the Rock sits atop the Haram al-Sharif/Temple Mount; and on the skyline is the Mount of Olives, punctuated by the tall Russian Ascension bell-tower. 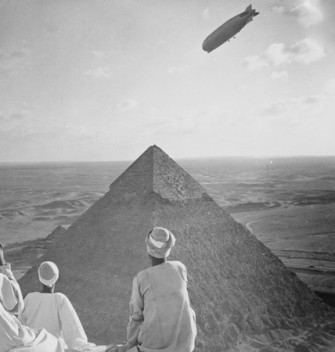 The photo depicts what is actually a well-documented event: the visit of the German dirigible Graf Zeppelin to Jerusalem on April 11th, 1931. The famous airship had begun it’s brief journey to the Middle East on April 9th from its base in Friedrichshafen, Germany, and it landed at Heliopolis near Cairo at dawn on the 11th. That same morning, it set off on a one-day, round-trip sightseeing excursion to Jerusalem, reaching there at 10 a.m. in conditions of intermittent rain. 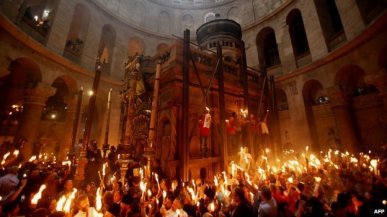 The Holy Fire ceremony in the Church of the Holy Sepulchre (Source: http://www.i24News.tv)

The airship reportedly hovered for some time, with its engines stopped, about 100 meters above the Church of the Holy Sepulchre, and that seems to be exactly what was captured in the featured image (top). That date – April 11th, 1931 – happened to be Holy Saturday in the Orthodox Christian calendar, thus the dirigible’s passengers were able to view a colorful spectacle being played out below: the masses of people gathered for the annual “Holy Fire” festivities. It is an Easter spectacle which has been observed since Medieval times at the Church of the Holy Sepulchre–and indeed spills out in a wild display through all the surrounding streets.

While at Jerusalem, the great airship also hovered over the Dome of the Rock, the German Consulate, the Schneller orphanage and school (a German-supported institution on the western edge of the city), and the British High Commissioner’s residence at Government House (today’s UN headquarters) on the southern rim of Jerusalem’s “holy basin”.

After this brief visit, without ever touching down in Palestine, the Graf Zeppelin (average speed approx. 100 km/62 miles per hour) returned to Egypt and landed in Cairo at 4 p.m. the same day. It arrived back in Germany, via Constantinople, on April 13th. 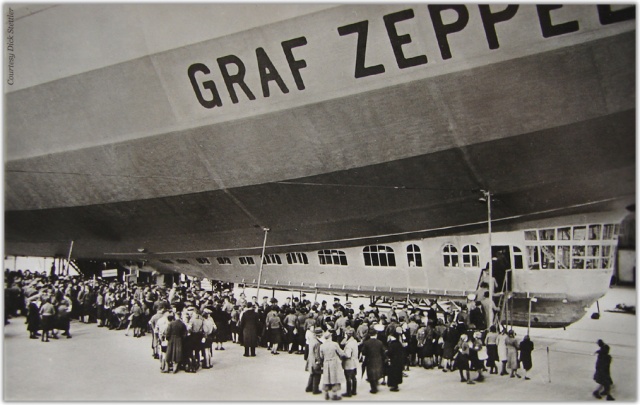 Gondola of the Graf Zeppelin

The Graf Zeppelin (D-LZ 127) was a German-built and -operated, hydrogen-filled, rigid airship which flew commercially from 1928 to 1937. The largest such craft of its day, it was the pride of Germany in the years between the World Wars, carrying its passengers in great luxury on such journeys as an around-the-world tour (1929), a polar expedition (1931) and, during its final five years, regular passage between Europe and South America. The Graf  was abruptly withdrawn from active service the day after the loss of the Hindenburg in May 1937, but during its operational life the airship made 590 flights covering more than a million miles. 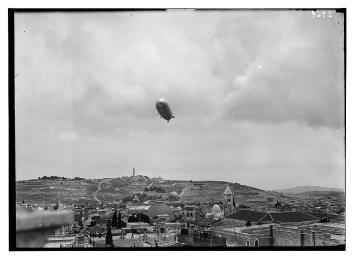 In all, there are 13 original Matson Collection images of the airship’s excursion to Jerusalem residing in the U.S. Library of Congress. Unfortunately, all but one of these (left) sustained serious water damage. This occurred during the negatives’ many years in storage in the basement of the Jerusalem YMCA, after the Matson Photo Service had ceased its Jerusalem operations (1950s) until the archive was fully retrieved and brought to America (1970s). Below is a different, side-on view of the airship: 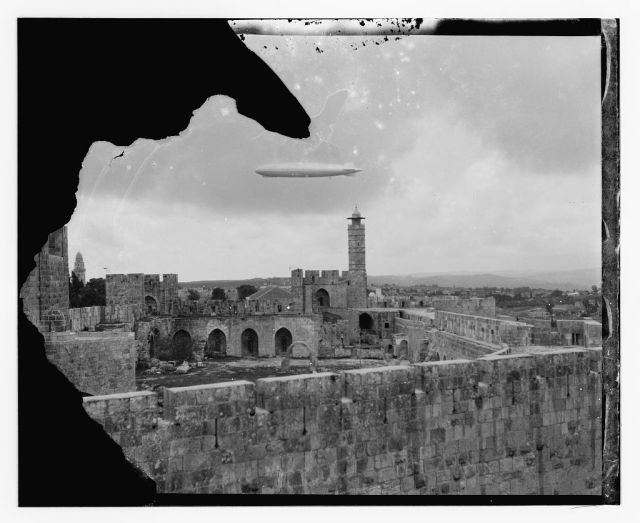 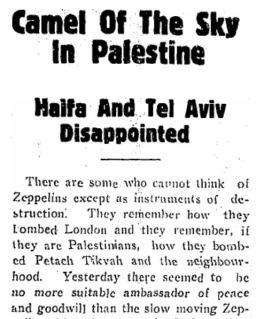 The unusual event of 1931 was of course duly noted in the Jerusalem press. The main article [◄ CLICK on image at LEFT], published the following day, details the Graf Zeppelin‘s local itinerary. (Notes: Two items in the article bear explanation: (1) The first two sentences refer to the source of negative popular perceptions of airships: the German strategic bombing of England during the World War; and the British bombing of Arab Palestinians, in response to their attack on the Jewish town of Petakh Tikvah, on 5 May 1921, an act authorized by Winston Churchill in his role as Colonial Secretary. (2) At the time, the term “Mosque of Omar” was still being used–inaccurately–to refer to the Dome of the Rock.)

Another article a few days later [▼BELOW] noted the field day local photographers had documenting the dirigible’s visit! 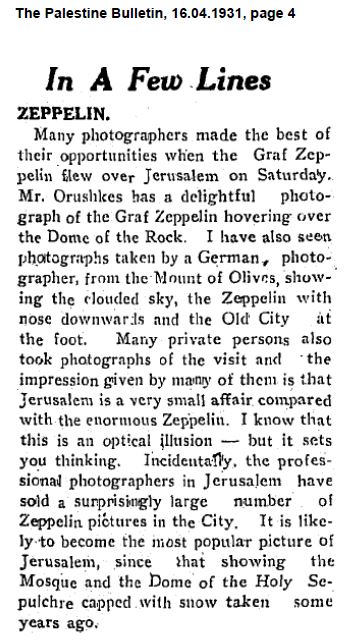 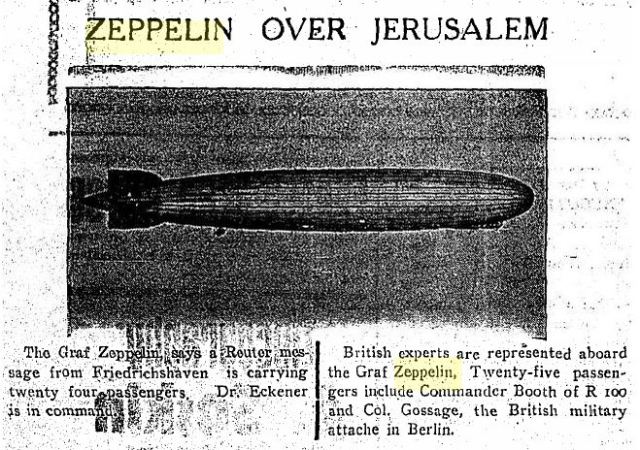 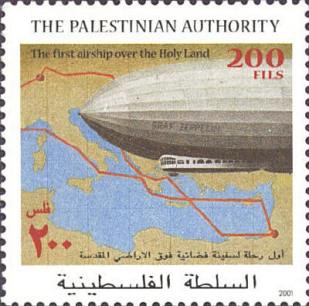 Finally, the Graf Zeppelin had in fact visited Palestine and Jerusalem once before. In late March, 1929, still during its early, demonstration phase of operations, the airship carried 25 passengers on a circuit that included the eastern Mediterranean. On March 26, after being delayed by weather, the airship appeared in the skies over Haifa in the late afternoon and dropped mail there. Proceeding to Tel Aviv, it circled that city as well, then made another mail drop inland at the Ramleh aerodrome. By the time the Graf arrived over Jerusalem it was after 7 p.m. and already dark, thus there are no known photographs of the occasion–despite a searchlight beam illuminating the airship from the roof of the German Consulate. Nevertheless, the great craft circled the Holy City and neighboring Bethlehem for about an hour at low altitude, its lights and the roar of its engines drawing throngs into the streets. The Palestine Bulletin newspaper likewise covered this 1929 event in some detail [CLICK on headline BELOW for article]:

Web-site of the German Embassy in Cairo (in German): http://www.kairo.diplo.de/Vertretung/kairo/de/06/DeutscheSpuren/Zeppelin__Bildergalerie.htm

This is one of a series of posts highlighting images produced by the Photo Department of the American Colony of Jerusalem (and later by Eric Matson, working independently), between about 1897 and 1946, as well as other aspects of Colony history. The springboard for some of these posts was work I did in collaboration with Todd Bolen on his digital publication project of  American Colony/Matson images. For more background on the Colony, see my on-line article “Jerusalem’s  American Colony and it’s Photographic Legacy“.

2 Responses to Through the American Colony Lens: GRAF ZEPPELIN OVER JERUSALEM