Through the American Colony Lens: A BRIEF WINDOW TO ANTIQUITY

The American Colony photographers were often documenting sites of biblical importance, at least the traditional places as they were then understood and being presented to pilgrims and tourists. They also captured on film, whether intentionally or more by chance, things of archaeological interest from antiquity. And, they were sometimes recording scenes that, unbeknownst to them, would be obscured or completely lost to future generations. The two very interesting images featured here — similar in appearance but clearly separated in time — encompass all these facets of the photographers’ work!

The pictures provide evidence — now hidden by layers of later construction — that the traditional Pool of Siloam in Jerusalem is indeed the remnant of a much larger ancient pool on exactly the same site. The photos, looking north, were taken sometime after the completion of the excavations of Fredrick Bliss and Archibald Dickie in the area in the 1890s, after which a mosque (top left corner of photos) was constructed adjacent to the existing pool (and inside the ancient one). The excavators, who carried out their work on behalf of the Palestine Exploration Fund, wrote in 1898:

The Siloam people took advantage of our excavations to erect a small mosque in the north-western angle of the original pool, resting their flooring on the debris. They . . . laid bare about one-half of the upper part of the northern wall of the original pool…  (Bliss and Dickie, Excavations at Jerusalem, 1894-1897, p. 159)

The  “northern wall of the original pool” which they refer to is almost certainly the wall section visible here, behind the donkey standing on the terrace. Note that it is built of large, finely-dressed ashlars, topped by a classical moulding. Excavating mostly by the use of shafts and tunnels — digging in tight, enclosed spaces underground — Bliss and Dickey had already identified a nearly square ancient pool which they dated to the Roman period. Measuring approximately 75 feet (23 m) on a side, the pool was surrounded by arcades and was connected by a courtyard and steps (on the western side) to a stepped street running northward toward the Temple Mount.

Now, thought questions: How aware were the Colony photographers of the findings of Bliss and Dickie, and how focused were they (if at all) on the exposed ancient wall? In other words, what was their actual purpose in recording these particular images at the time they did? (Disclosure: I don’t know the answers!) 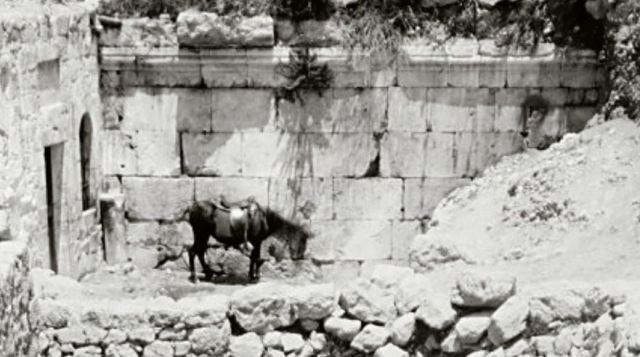 Bliss & Dickie’s section through the Upper Siloam Pool, looking north (Excavations at Jerusalem, p. 143). The narrow center part, appearing rather like a deep trench, is the pool as it has existed in modern times; shading (supplied) shows the approximate location of the exposed section of wall.

The Siloam Pool lies well outside the southern walls of the Old City, at the southern tip of the ridge known today as the City of David. It is situated at what is, topographically, nearly the lowest spot in the so-called “holy basin” of Jerusalem. And, it is a place-name that has survived the centuries: “Siloam” comes to us through the Greek of the New Testament; Silwan is the equivalent in Arabic, Shiloach in Hebrew. 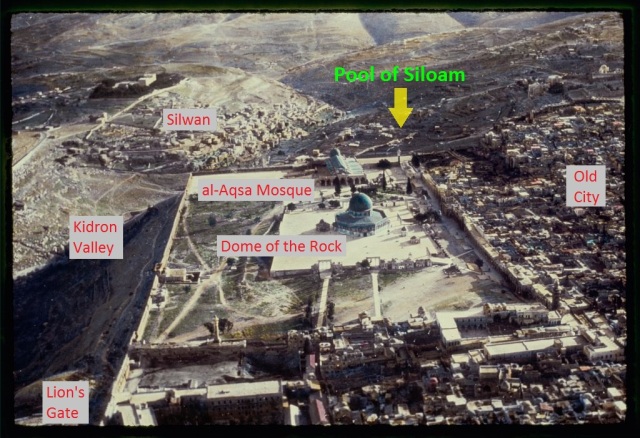 The pool’s importance for Christian visitors to Jerusalem, of course, is in connection with the healing miracle of Jesus as recounted in the Gospel of John, Chapter 9. There we are told of a man blind from birth whom Jesus encounters in the vicinity of the Temple. Applying mud made from his spittle to the man’s eyes, Jesus sends him to wash in the Siloam Pool in order to receive his sight. (Thought question: Where does the miracle “happen”?) The text says that the name Siloam means “sent”, no doubt reflecting the source of the waters, which to this day are “sent” to the pool from the Gihon Spring via a long rock-hewn conduit, Hezekiah’s Tunnel.

Beginning with Bliss and Dickey, modern archaeologists have also discovered parts of a long stepped street which led down from the Temple area and ended near the pool. (It is along this street that the blind man in the story would have walked!) Moreover, in very recent years, a second, lower Siloam Pool has also come to light, a large, well-preserved reservoir with stepped sides; undeniably impressive, as of this writing (and probably for many years to come) only its northern edge and an adjoining plaza have been uncovered. In any event, I now refer to the feature seen in these historic American Colony photos — to avoid any confusion — as the Upper Siloam Pool. (By the way, several other images of the pool can be viewed by searching the Matson Collection of the Library of Congress.)

Another, apparently later view of the Upper Siloam Pool, looking north: A minaret has been built above the edge of the ancient pool; on the left an upper retaining wall and fill material seem to have been added. On the skyline (left) are the southern walls of the Old City. (LOC/Matson image #06745)

In the Byzantine period, the earliest Christian pilgrims to Jerusalem apparently visited the arcaded, Roman-period upper pool here, remembering the place of the miracle in John 9. In fact, the account of the Bordeaux Pilgrim from AD 333 refers to the place, giving the four-sided arcade surrounding the pool the descriptive Latin name quadriporticum. (We can’t be sure, but it is possible that the lower pool was already silted up and out of use by that time–it doesn’t take long!) Then in the 5th century, a commemorative church of unusual design was built partly overhanging the northern edge of the original upper pool, and Bliss and Dickey discovered many traces of this church as well (the remains were covered over and are not visible today). 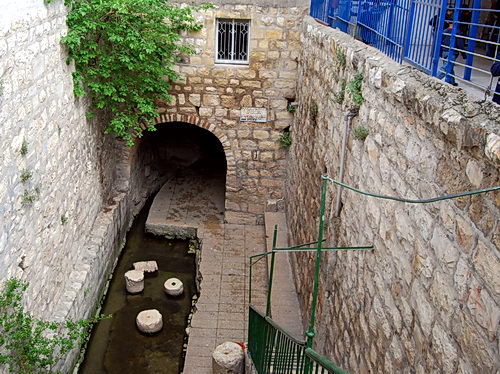 This is one of a series of posts highlighting images produced by the Photo Department of the American Colony of Jerusalem (and later by Eric Matson, working independently), between about 1897 and 1946, as well as other aspects of Colony history. The springboard for some of these posts was work I did in collaboration with Todd Bolen on his digital publication project of  American Colony/Matson images. For more background on the Colony, see my on-line article “Jerusalem’s  American Colony and it’s Photographic Legacy“.

1 Response to Through the American Colony Lens: A BRIEF WINDOW TO ANTIQUITY