*UPDATED* Restoration Work Begins on the Edicule of the Holy Sepulchre

This post mostly reflects my own curiosity about the restoration work just getting underway at the Church of the Holy Sepulchre in Jerusalem’s Old City. The specific focus is the edicule, the built structure which stands at the center of the church’s rotunda, marking the spot of Jesus’ Tomb. In a sense, the edicule recreates the tomb, ever since the original bedrock tomb-shrine was demolished in a great destruction of the church in the year 1009. As such, it serves as the focal point of the premier church of all Christendom. Thus, the very fact that the church’s rival Christian communities were able to come together and agree on the repairs–however badly needed–represents a small miracle in itself.

It is to be a conservative restoration, intended to return to structural integrity the present 1810 edifice, which is built mostly of marble. Beneath the 1810 masonry, however, there apparently lie elements of the earlier edicules, from the 16th and 12th centuries–plus, presumably, traces of the bedrock Tomb of Jesus. It will be interesting to see how deep the restorers’ explorations actually go!

Like the church itself (whose restoration spanned the 1960s to the 1990s), the edicule has been impacted by earthquakes (especially that of 1927), by the heat and smoke of oil lamps and candles, right down to the breath exhaled by millions of pilgrims! Once the work is completed, the biggest change visitors will likely notice will be the absence of the external bracing of iron girders installed by British engineers in the 1940s, a safeguard which, by all accounts, is the main thing that’s kept the structure from collapsing into a pile of rubble.

Here is an interview, published by the Franciscans, with the scientific director of the present project, who serves on the faculty of a Greek University. A few interesting facts gleaned from the report:

Additional background on the project (including photos), again from the Franciscans. And HERE.

As promised, a few photos, all images originating with terrasanta.net. Two are screen captures from a video (the report itself is not directly related, about the ceremonial visit of the new Custos–head of the Franciscans in the Holy Land–to the church); the video is found on-line HERE. 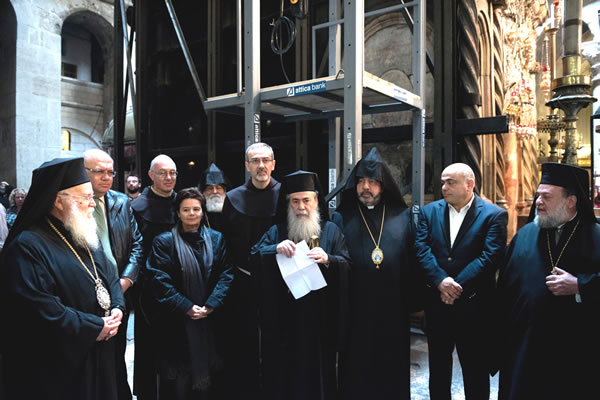 22 MAR 2016–The day the restoration agreement was signed by the Christian communities who share control of the church. The Greek Orthodox, Armenians and Franciscans actually joined in a ceremony for the blessing of the scaffolding, one section of which was already in place against the edicule’s south facade. (terrasanta.net)

Early June 2016– A barrier screen keeps pilgrims at a safe distance from the structure as work proceeds. The view is from the gallery area of the Franciscans, looking south; the front of the edicule is at right. 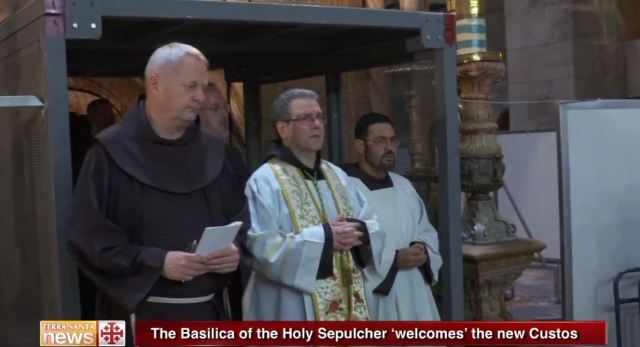 Early June 2016– A small steel cage set in front of the portal protects those entering and exiting the edicule.

Another view of the “cage”. A Greek Orthodox monk guards the portal while the Franciscans circumambulate the edicule in ceremonial procession.

From the Greek Orthodox Patriarchate, here is a slide show including images of the exposed 1810 masonry, once the marble cladding has been removed; the buttressing added to the iron “cage” from the 1940s which, it turns out, is badly deformed; and an exposed section of original bedrock at the rear of the Edicule, where the tiny Coptic chapel has apparently been completely removed.

Also, here is a full technical report on the project as it has unfolded this far, with many photos and diagrams (PDF file, 122 pages). It is highly detailed, presented mostly in technical language, and not rendered in the clearest English– but still well worth a look. 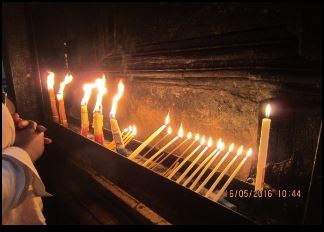 One of the interesting recommendations being made already is a future ban on the burning of candles in close proximity to the Edicule’s architectural surfaces– the resultant “thermal stresses” and black, oily deposits have contributed to the monument’s degradation, it seems; the report suggests instead “special candlesticks” kept at a safe distance, with adequate ventilation. (Whether by design or not, the horizontal I-beams of the 70-year-old iron bracing made a perfect tray for the burning of such candles, sometimes whole bundles of them, ever since its installation by the British.)

Many thanks to Joe Anderson for making me aware of these latest resources.

UPDATE:  See my follow-up post on the exposure of the bedrock remains within the Edicule, HERE.

For more background on the Church of the Holy Sepulchre, see my extended article HERE.