UPDATED | The Bars Come Down! Restoration of the Edicule of the Holy Sepulchre nears completion

After many months of painstaking, professional restoration work, the Edicule of the Church of the Holy Sepulchre — the 19th-century monument enclosing remnants of the original bedrock Tomb of Jesus — has finally been freed from its protective cage of iron girders. That bracing, installed by the British in the 1940s, provided much-needed reinforcement to the distressed 1810 structure, which is built largely of marble.

The Edicule represents the centerpiece of the ancient church and serves as a focal point for the devotion of Christians worldwide. Now, following the thorough reconditioning, both structural and aesthetic, the Edicule’s original beauty is revealed once again — and the view of it wonderfully unobstructed. 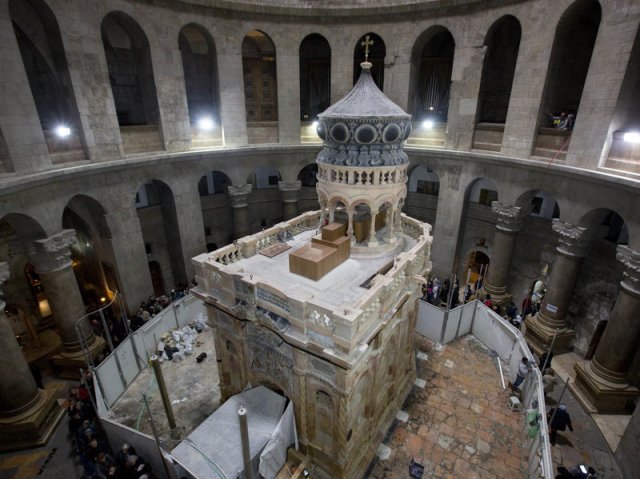 The restored Edicule, viewed from the northeast. Here, a barrier screen still keeps visitors at a safe distance; throughout the work actual pilgrim access inside was interrupted only briefly, however.

See the story as reported by NPR, from CBS News (with more photos), and from Reuters.

For background, see my previous posts tracking this project HERE and HERE.

Good news / bad news: A day or two after my post (above), the barrier screens seen above were removed and an official ceremony was held marking the completion of the restoration project. At about the same time, the project’s director made the striking announcement that the Edicule was still at risk of “catastrophic” collapse unless an additional multi-million dollar program of stabilization is carried out on the surrounding sub-floor areas. 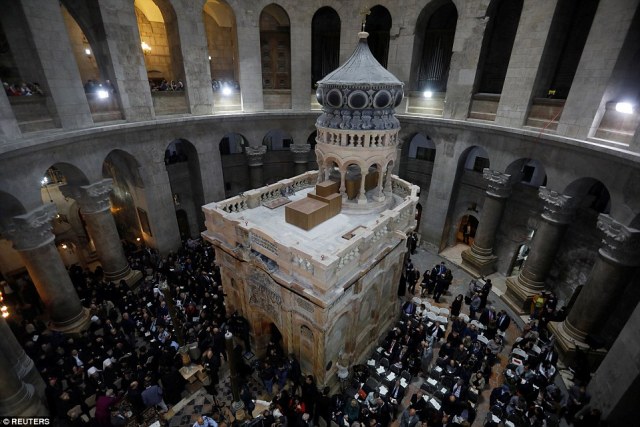 The dedication ceremony for the restored Edicule, March 2017. Photo: Reuters, via dailymail.com

The full story, from the National Geographic web-site, including several brand new photos, is here:

Now, a 5-minute VIDEO report from the Franciscans‘ Terra Santa News about the March 22nd ceremony, which included representatives of all of Jerusalem’s Christian communities (no mention of the needed follow-up stabilization) :

1 Response to UPDATED | The Bars Come Down! Restoration of the Edicule of the Holy Sepulchre nears completion