“May Your Home Be Destroyed”

Those were the words hurled at the US president by Mahmoud Abbas (aka Abu Mazen) in a rambling, defiant speech before the PLO Central Council on January 14th. It is said to be one of the milder curses in the repertoire of Arabic invective, as Israeli commentator Uri Avnery explains in his illuminating article, highlighted below. 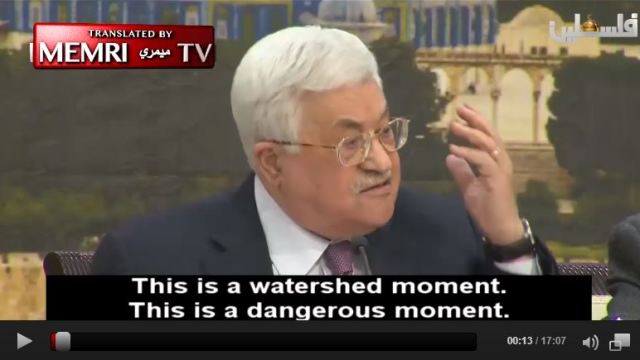 As usual, Uri Avnery shoots from the hip and connects all the right dots in providing interpretation and context for this event: First, Trump’s appointment early on of two ardent, settler-connected Zionists to key diplomatic positions as US ambassador and overseer of some imagined “peace” negotiations — Trump’s own bankruptcy attorney and his son-in-law, respectively. Then there was Trump’s ill-advised proclamation of Jerusalem — an undifferentiated and undefined “Jerusalem” — as the capital of the State of Israel last month, and his administration’s plans to move the US Embassy there.

Key points in Abbas’ speech: There is no “peace process” and hasn’t been for a long time. Oslo — a terrible deal for the Palestinians that succeeded only in institutionalizing the Occupation — is likewise dead. Further, the United States is not capable, and has never been, of serving as honest broker in dealings between Israel and her Palestinian neighbors — it is simply too aligned with Israeli interests in a host of ways. Thus, Mr. Trump’s so-called “deal of the century” (whatever he had in mind, if he actually had any inkling at all) — deserves to be treated as a cynical farce, a non-starter.

Anyway, I’ll let Uri Avnery tell the story in his own inimitable way. A fixture on the Israeli scene for most of his 90-plus years, Avney displays his usual amazing grasp of the region’s history, of the personalities and issues involved, and of the minds of both the Israeli and Palestinian peoples.

You can find video excerpts of Abbas’ Jan. 14 speech (with English captions), plus an English text version, on this web-page from MEMRI, the Middle East Media Research Institute.

May Your Home Be Destroyed

WHEN I first met Yasser Arafat in besieged Beirut, in the summer of 1982, Abu Mazen was not present. But when I met him again in Tunis, a few months later, he asked me to meet Abu Mazen, too.

Abu Mazen, it transpired, was the Fatah leader in charge of Israeli matters.

MY FIRST impression of Abu Mazen (Mahmoud Abbas) was that he was the exact opposite of Arafat. He looked like a schoolmaster.

Arafat was an outgoing type, who liked to embrace and kiss people and to establish close relations from the outset. Abu Mazen was much more reserved and withdrawn. Yet I liked his personality.

Even then, more than 35 years ago, he belonged to the first rank of the Fatah and PLO leadership, side by side with people like Abu Jihad (who was killed by Israel), Abu Iyad (who was killed by Palestinian extremists), Farouk Kaddoumi (who objected to Oslo and was excluded).

I met with Abu Mazen every time I visited Arafat in Tunis. When I heard that he was originally from Safed, the mixed Arab-Jewish town in northern Palestine, this was an additional bond. Safed was the second home of my wife, Rachel, who, as a child, went there every summer. Her father, a children’s physician, practiced there in the summers, too. Abu Mazen could not remember whether he was ever treated by him as a child, before his family had to flee in 1948.

After the assassination of Arafat (as I believe, without proof), Abu Mazen assumed the leadership of both Fatah (the party) and the PLO (the semi-government). He is no second Arafat – he has neither the heroic stature nor the international status of the Founder. But he was accepted by all.

As the leader of a small and weak people, faced with a much stronger adversary, Arafat believed that the Palestinians must use all the few instruments at their disposal: organization, diplomacy, violence, whatever. But after the Yom Kippur war, he started on the path to Oslo. As he explained to me: “I saw that after an initial huge victory of surprise, the Arabs lost the war. I realized then that there was no way to recover our country by war.”

I think that Abu Mazen did not believe in violence to start with. It is not in his nature. He believes in the great Arab weapon: patience.

Arabs have a very different concept of time from Jewish Israelis – we are impatient, we need instant gratification. Our political history is short, our state came into being just 70 years ago, we have no patience whatsoever.

Arabs have a long, unbroken history, with many ups and downs. They are used to waiting. Patience is a mighty instrument.

I believe that faced with the might of Israel, that is the real doctrine of Abu Mazen – wait patiently until conditions change, let Israel exhaust itself. In the meantime, hold on, cling to the soil, don’t give up an inch, what the Arabs call “Sumud”. It may take one, two, three generations, but in the end we shall win.

This may not be a popular strategy, not a glorious one, but it may prove effective over time.

This, at least, is my conjecture. Nobody told me so.

BUT EVEN a person like Abu Mazen may lose patience from time to time.

His by now famous Yekhreb Beitak speech was such a moment.

Yekhreb Beitak means, literally, “may your house be destroyed”. In the vast arsenal of Arab curses, it is one of the mildest. It could be rendered as “Goddamn”. (In modern Hebrew, we woefully lack curses, so Hebrew-speaking Israelis have to borrow their curses from Arabic and Russian.)

By all standards, Donald Trump can drive anybody mad. But for Palestinians, he deserves far more extreme curses.

For many decades now, the United States has posed as the impartial arbiter between Zionist Israelis and Arabs. President after president has presented Peace Plans and organized Peace Initiatives, but nothing ever came of them. (Both the Egyptian-Israeli peace initiative and the Oslo agreement were hatched behind the back of the Americans.)

The reason is quite simple: the US has millions of Jewish voters, nearly all of whom are ardent Zionists. After doing nothing at all to save the European Jews during the Holocaust, they are torn by remorse. Arab voters are indifferent.

Therefore, all American presidents, except Dwight Eisenhower (who was so popular that he didn’t need the Jewish vote), have been strong supporters of Israel. Since all Israeli governments have rejected the return of the occupied territories, and especially East Jerusalem, American impartiality was a sham.

But Trump is something special. He has appointed an ardent Jewish right-wing Zionist as ambassador to Israel. He has appointed his Jewish son-in-law and some other Zionists as mediators between Israel and the Palestinians. And in the end he has recognized Jerusalem as the capital of Israel and announced that he is going to move the US embassy from Tel Aviv there.

If he had been speaking about “West Jerusalem”, the storm would have been mild. In practice, everybody agrees with West Jerusalem being the capital of Israel. But Trump spoke about Greater Jerusalem, only hinting that in some indefinite future, final borders may be drawn.

It is East Jerusalem, of course, which is the real battlefield. The Israeli government claims it as the birthplace of the Jewish religion, the location of the First and Second Jewish Temples and of the Western Wall (which was a part of the Temple’s supporting wall, but not of the temple itself).

Speaking of recognizing “Jerusalem” as part of the Jewish State was a heavy blow at the most profound Arab religious and national beliefs.

When the United Nations drew up the partition plan of 1947, it provided for a Jewish state and an Arab state, but conferred on Jerusalem the status of a separate unit. That was unacceptable to both sides.

Immediately after the 1948 war, when my friends (both Jews and Arabs) and I drew up the first peace plan based on the principle of “Two States for Two peoples”, we called for a “United Jerusalem, Capital of the Two States”. This is still the only viable solution.

The late Faisal Husseini, the unchallenged leader of the population of East Jerusalem, accepted this principle. There are many photos of us two standing together at demonstrations under this slogan. Abu Mazen accepts it, too.

SO WHAT did Abu Mazen say in his long speech at the Palestinian parliament, apart from the half-joking curse that made the headlines?

Actually, there was nothing new. He confirmed the terms of the “Arab peace plan“, to which I, too, agree wholeheartedly.

He completely rejected the so-called “one-state solution”, to which some extreme left-wingers subscribe now out of sheer despair. This would mean in practice a Jewish-dominated apartheid state.

He put an end to all the sham slogans whirling around: the notion that the US could be a mediator, the fiction that there is a “peace process” going on, the idea that the Oslo agreement is still alive and kicking.

The resolutions of the meeting – the PLO Central Council, which is the Palestinian parliament – finally reject the notion that the US could possibly act as an impartial mediator.

The Council decided to “suspend recognition of Israel”, which is a rather empty gesture. But it also issued a call “to stop security coordination (with Israel) in all its forms”, which is a much more serious matter. I doubt whether Abu Mazen can do this.

It specifically mentions the girl Ahed Tamimi, who had slapped an Israeli army officer on camera, and whom I have called the Palestinian Jean d’Arc.

It called for a boycott of the products of the settlements – a boycott which Gush Shalom, the peace movement to which I belong, initiated in 1998. But it also called for support of the BDS movement, which advocates a boycott of everything Israeli.

For lack of anything better, it calls for more diplomatic action in the UN, the International Criminal Court and other international institutions.

Nothing really very new, but a determination to resist.

ABU MAZEN has no deputy. Like many political leaders everywhere, he detests the idea of an heir.

He is now 82 years old, but still younger than I. It seems that – like me – he has decided to live forever.  [END]

Just a word about Uri Avnery:  His full bio can be found on-line HERE. The short version: Born in Germany into a middle-class family but largely self-educated, he “made aliya” (emigrated) to British Mandate Palestine in 1933. During his long and colorful life, which spans the entire history of the State of Israel (and much more), he has been a writer, essayist, publisher, photographer, member of the Knesset, and a strong and pointed peace activist.

Interestingly, he was once a member of the Irgun, the pre-state Zionist underground organization, however he came to differ strongly with their philosophy and violent tactics, and left. Politically, Avnery wound up on the Zionist-Israeli left — many would say, with some justification, the far left.

His storehouse of information and experiences — history (Jewish and otherwise), literature, the Bible, insider connections with regional leaders (Israeli, Palestinian and otherwise), etc., etc. — is vast and impressive. And, he is an excellent writer, always with something interesting to say. In short, the man, in my opinion, has paid his dues and has more than earned a hearing as an authentic Jewish-Israeli voice.